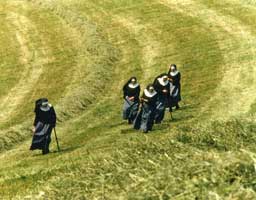 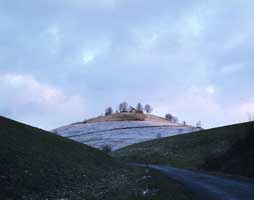 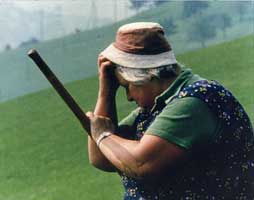 In 1979, I considered realizing "Ex Voto". Thinking about my country, I felt the urge to reach to the essential of life, of survival. So I left with my camera and filmed everything that cropped up in front of me. During the shooting, I became aware that the film mirrored my own spiritual and moral needs.
I have tried to find an answer, to get acquainted with my most basic feelings which are not, I think, very different from those of other men.

It is an attempt at discovering the meaning of belonging to a country - with all ist contradictions - HERE....TODAY. - Erich Langjahr

"Ex Voto" means a votive offering, a gift to a saint, in gratitude for fulfilment of a need. Young Swiss director Erich Langjahr, who prodigiously performed all the principal creative functions in the making of this excellent film, offers his "Ex Voto" as a holy duty. He is keeping his pledge to himself to film his beloved mountainous homeland in central Switzerland, to capture its beauty and to sound the alarm as industrialization threatens that beauty.

"Ex Voto" is a deeply personal film, poetic and lyrical, shot over a period of six years. For Langjahr, the film is a pilgrimage, a coming-home-again, his attempt "to touch the essentials of life, and of survival."

Langjahr shot in all seasons, in all extremes of weather, filming the cycle of life – plowing, planting, harvesting, time to milk the cows, time to slaughter the coat, time to worship. But it is always time to worship, even as you pass a small shrine beside a narrow mountain path, the pause that refreshes, then  you resume  trudging down to the village market deep in the valley. Langjahr’s point is that these mountain folk find joy in their work and in being close to nature, living with animals. They have a spontaneous spirituality about their lives. The Church work, too. The young nuns of the neighboring monastery sing as they thresh grain. These scenes from a one-man documentary could not be bettered by Robert Wise in "The Sound of Music."

What a shame that these idyllic mountain village and steep pastures are being menaced by the big caterpillar tractors. Their way of life is being excavated, because under their earth are deposits of gravel and hard stone needed to build the expanding cities, the factories, the superhighways. So the proud old mountains are being gutted, their innards trucked out to the construction sites.
A recurrent figure or motif or "Ex Voto" is a strong, fat, elderly farm woman, who embodies indestructible Swiss optimism. She sings, recites and chatters to herself continuously, as she works tirelessly at a thousand farm chores, often seen carrying heavy burdens uphill without panting. The camera at first seems unkind to her, emphasizing her grotesquely thick legs, but we soon admire her Earth Mother quality, and we hope her faith in Switzerland prevails.

"Ex Voto" was perhaps the best film at the Nyon festival.